This section presents some of the more advanced rocketry information you will need to move further in the hobby.  The material presented is also covered on the S.T.A.G.E.R. Advanced Rocketry Quiz.
Model Rocket Stability
The Barrowman Method for calculating centre of pressure was developed in 1967.  For those interested, a detailed approach to using this method can be found here.
For a model rocket to be stable and fly safely, its centre of gravity must be ahead of its centre of pressure.  A rocket whose centre of gravity is ahead of its centre of pressure by a length equal to the rocket's diameter is said to have one caliber of stability.  This is typically the minimum caliber of stability for a successful, safe flight.
For a design that is unstable, several modifications could be made, including:
There are three axes of rotation for a model rocket.  The first is the roll axis, which is a line from the tip of the model's nosecone through its centre of gravity to the centre of the nozzle exit.  Careful alignment of fins will prevent motion around the roll axis.  The second axis is perpendicular to the roll axis through the centre of gravity, called the pitch axis.  An unstable rocket may rotate end-over-end vertically around the pitch axis.  The yaw axis is perpendicular to both the roll and pitch axes and also extends through the centre of gravity.  An unstable model may rotate sideways through the yaw axis.
Even a stable model will experience slight rotation around the pitch and yaw axes, however, it will be able to quickly recover and swing back into a more desired orientation.  An unstable rocket will not be able to recover and results in an unsafe flight.
There are several pieces of software that can be used to design stable rockets and predict their centres of gravity and pressure.
​Open Rocket, Rocksim, and SpaceCAD are three of the most popular.
Weather Cocking
Engines and Thrust Curves
Each model rocket engine is named using a letter and two numbers.  The letter represents the range of total impulse that the engine provides.  The first number represents the average thrust provided by the engine over its burn time.  The second number represents the delay time, in seconds, between the end of the propellant burning and the ejection charge firing.  (See Beginner Rocketry for more information.)
Two thrust curves are illustrated above; one for an Estes A8 engine and the other for an Estes B4 engine.  The A8 engine produces a maximum thrust of about 10 N at 0.2 s after ignition while the B4 produces over 12 N of thrust after about 0.12 s.  The A8 engine then continues to provide a little over 2 N of thrust until burnout at 0.7 s while the B4 engine provides 3 N of thrust until about 1.0 s.
Multi-Staging
Multi-staging is a method of igniting two or more engines in series in a single rocket.  The first engine is housed in a booster section (body tube and fins) that falls from the rocket and tumbles to the ground when the ejection charge fires.  The booster engine has no delay between burnout and ejection.  Its ejection causes the engine in the next stage to ignite.  This next stage can be a second booster or the main, sustainer part of the rocket.
Clustered Engines
Engine clustering is a method of igniting two or more engines simultaneously in a single rocket.  All engines in a cluster are typically of the same type so that ejection occurs simultaneously.  It is important to wire the igniters for all the engines in parallel so that all engines ignite at the same time.  Sometimes a clip whip is used to help connect the igniters.  A clip whip has two wire leads at one end to connect to the launch system and two, three, or four sets of clips at the other end to hook up the igniters. 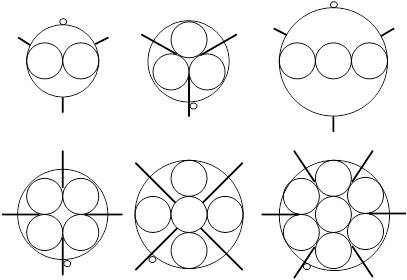